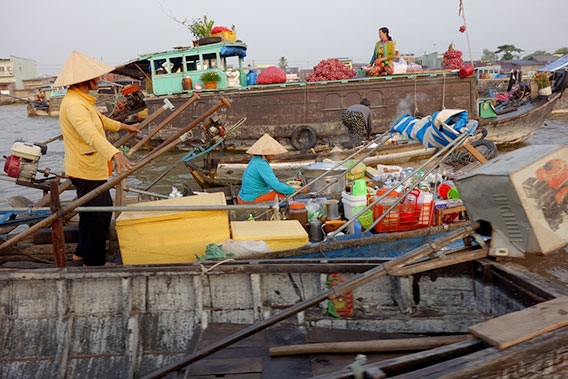 "Leadership Challenges for Public Health" was the title of a speech by CMB Trustee Harvey Fineberg to about 200 faculty and students at the Hanoi School of Public Health in Vietnam on January 21, 2013.  The invited lecture following a dinner reception by the Vietnam Health Minister Madame Nguyen Thi Kim Tien was given as part of a CMB delegation visit to the leading school of public health in Vietnam and also a long-standing CMB grantee. Hosted by Dean Le Vu Anh of the Hanoi School of Public Health, the lecture was intended to promote and broaden critical thinking about the challenges in the education of public health professionals.

Dr. Fineberg began by defining public health as “doctors for populations and societies,” in contrast to medical doctors for individuals. In his lecture, Dr. Fineberg emphasized six common challenges for public health around the world. First are the three major transitions that are changing the nature of health threats: 1) demographic transition due to ageing and urbanization; 2) epidemiologic transition of the non-communicable diseases and, 3) disability of mental, muscular-skeletal, and other impairments. Second is the perennial challenge of insufficient financing, which compels public health to prioritize and make choices. Third is the core ethos of prevention, which is under-valued because the returns are invisible. Fourth is the importance of communications as public health must educate the public. Fifth are team-work and gaining partners. Finally, sixth is global thinking matched by local action.

A lively question and answer period ensued in response to the lecture. Topics covered included whether health equity and professional ethics belonged on the list and newly emerging health threats that will place new demands on public health. In Vietnam, there was concern that the role and importance of public health be more clearly articulated through citing specific examples of public health success stories.