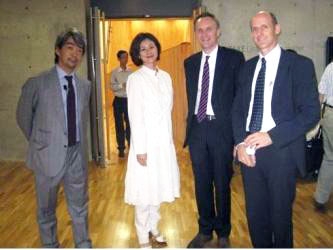 At a September 1 Symposium in Tokyo organized by the Japan Center for International Exchange, Lancet editor Richard Horton said the Japan series represents “the greatest concentration of Japanese health expertise ever brought together in a western medical journal.”

Over the past 50 years, Japan has been able to achieve good population health at low cost with improved equity, according to more than 50 contributors to The Lancet’s Japan series (http://www.thelancet.com/series/japan). The 6 papers and 8 commentaries, published under the theme of “Japan: Universal Health Care at 50,” scientifically analyze Japan’s health achievements, as well as future challenges.

Japan not only leads the world in life expectancy – 86 years for babies recently born – but has registered gains in longevity across all regions and socioeconomic groups. The authors trace the roots of this success to controlling infectious disease and hypertension in the 1950s and 1960s leading to the introduction of universal health coverage in 1961, which gave all citizens equal opportunity to health promotion.

Japan’s experience has relevance for other countries, particularly its Asian neighbors. Its capacity to contain health care costs is one example. Japan spends only 8% of its GDP on health care, even though it relies on a private sector, fee-for-service system and its citizens see a doctor an average of 13 times per year. Lancet contributors credit global budgeting and a nationally uniform fee schedule as the main drivers of cost containment. Other countries can draw lessons from Japan’s mandatory long-term care insurance program, which has proven effective and manageable in delivering care to the aged.

But can universal coverage, affordability, and other hallmarks of success be maintained? Or do demographic change, economic stagnation, and political fragmentation threaten the Japanese model? The series also tackles these questions, and the authors of its final paper urge the country to “implement human-security based reforms, provide more power and responsibility for health care to local governments, improve the quality of care, and boost its commitment to global health.”

As one of the funders of the Japan Lancet series, CMB President Lincoln Chen, speaking at the launch symposium, said the Lancet series creates an opportunity for Japan to reinvigorate its global health cooperation. In China and other Asian countries, health professionals and policy makers are developing new roadmaps for health care delivery, insurance, and medical education, and will be eager to exchange expertise and experience with their Japanese counterparts. The Lancet authors conclude that “Japan should be actively sharing these accumulated insights with the international community and using them to strengthen national health around the world in pursuit of progress in global health.” CMB provided support for this Lancet series, as well as for earlier series on China and Southeast Asia.