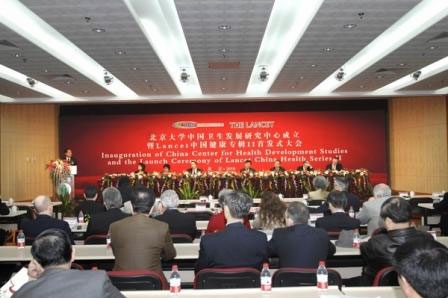 In Beijing on April 27, 2010, a dual launch ceremony was held to mark the inauguration of the China Center for China Health Development and the Lancet China Health Series II.

The sister ceremonial launch for the Lancet II Series (published in both English and Chinese) followed. The Series consisted of approximately half a dozen commentaries, two commissioned papers, and one solicited paper – about half the size of Series I. Immediately following the ceremonial opening, Richard Horton chaired a “bridge lecture” by Harvard Professor Bill Hsiao on research priorities followed by two Lancet panels with authors speaking to: (1) evolving health challenges in China, and; (2) China’s health responses and reforms. The aim of the bridge lecture was to stimulate academic discussion and to promote more and better scientific inquiries surrounding these two themes rather than delve into technical details of individual papers. At the conclusion, Richard Horton praised “future cooperation” and announced several steps to steeply increase Lancet engagement in China.