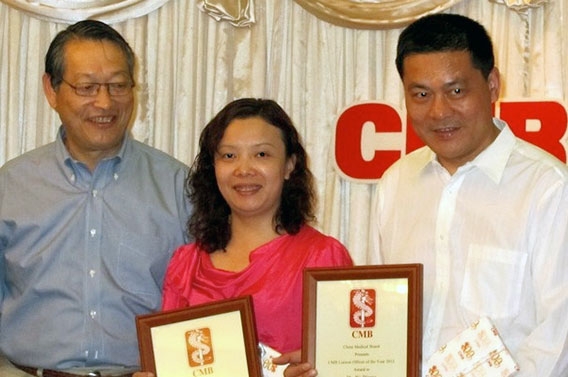 Wu Zhigang and Xie Yun of Central South University (CSU) both received the 2012 CMB Liaison Officer of the Year award for their outstanding work in support of CMB-CSU collaboration. Their work has helped CSU consistently rank among the top 3 CMB grant recipient schools for Open Competition awards. Their work has contributed to a high level of support, engagement, and awareness of CMB across CSU leadership, faculty and students. Below, Wu Zhigang reflects on CMB-CSU collaboration:

Q: How did you first get involved with CMB?
A: In April 1994, when I returned to Hunan Medical University (HMU, currently named Xiangya School of Medicine) after my studies at the WHO training center, then-President Hu Dongxu shifted me from 2nd Xiangya Hospital to the International Cooperation Office at HMU, assigning me to take charge of CMB grant management. He also asked me to escort him to attend the CMB President’s Council in Shanghai the following May. The President of CMB at that time was Dr. Sawyer. I remember at the first meeting all the university presidents and CMB officers waited for him in formal suits. When he entered the meeting room, he asked us to go back to our rooms to change out of our suits and into casual attire. It was a little bit beyond my understanding then.

Q: What has made CSU’s programs so successful?
A: Four major factors: 1) The Xiangya tradition of valuing friendship and cooperation with CMB, and endeavoring to do our job earnestly, conscientiously and carefully; 2) The leadership’s emphasis on and attention to CMB-related affairs, and excellent and reliable leadership of the university; 3) The CMB Liaison Office’s in-depth promotion campaign, well-designed organization and effective and powerful technical support, and; 4) The active participation and engagement of schools and institutes as well as the faculty.

Q: What are you most proud of about CMB-CSU relations?
A: CMB initiated its first funding to Xiangya in 1915. What I’m really proud of is the long-term history of cooperation and friendship between CMB and Xiangya over nearly one century. During this one hundred year period, we’ve had both honeymoon years and Cold War years. I can still remember when I first became involved with CMB in 1994 I was told that CMB was going to kick Xiangya out of the CMB circle, which made my university quite nervous. In recent years, CSU and CMB have continuously improved our relationship through sustained cooperative efforts. Currently, CSU’s work is being highly recognized by CMB. One could say our relationship has now stepped into the honeymoon period. The fact that I’ve experienced both phases of CSU’s relationship with CMB makes me feel very proud.

Q: What in your opinion has been the most impactful, interesting or exciting CMB-related project at CSU?
A: In recent years, CMB’s health policy sciences (HPS)-related programs have had a large impact at our university. HPS is a priority area for CMB funding, which matches the direction of current health reforms as well as requirements for the development of medical schools and hospitals in China. The launching of HPS has shed light on development among CMB grantee schools. Unlike CMB traditional programs, new HPS initiatives have enabled more faculty—especially young faculty, and also some students—to participate in open competition, which has had a wide-ranging influence at CSU and has become a brand of cooperation and development. Thanks to the HPS grant proposals and projects, in addition to learning from the concept of health policy sciences, I have become even more active in the organization and management of CMB grants. We have not only increased exchanges with colleagues in the CMB Beijing office, but moreover the annual CMB Liaison Officer meeting has provided a very good platform for us liaison officers to learn from and communicate with one another, and thus stimulates us to work with greater interest and enthusiasm.

Q: What are your hopes for the future of CMB-CSU partnership?
A: It is quite remarkable that Xiangya and CMB have cooperated for such a long time. I think it is what Buddhism calls ‘affinity’ that brings us together. It is my sincere wish that CSU and CMB will keep strengthening our cooperation and friendship. 2014 is the centennial anniversary celebrations for both CMB and Xiangya. Hopefully this year can serve as a key opportunity of collaboration.