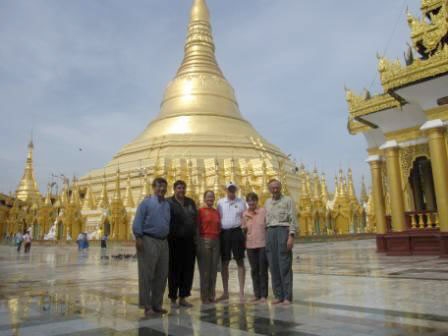 In the week leading up the June board meeting on June 14, 2010, CMB trustees embarked on an ambitious schedule of travel to various CMB grantees in Vietnam, Myanmar, Tibet, and Sichuan province in China. The purpose of these trips was to expose trustees to CMB’s work in Southeast Asia and to rural health in Western China.

At the same time, a second group including Harvey Fineberg, Jane Henney, and Tony Saich accompanied by CMB management advisor and Southeast Asia expert Peter Geithner, visited Myanmar, traveling to Yangon to visit University of Medicine 1 and 2 and the School of Public Health, followed by a trip to University of Medicine in Mandalay.

The third group including Tom Kessinger and wife Varyam visited Vietnam, where they were met by CMB President Lincoln Chen and accompanied by Vietnam Representative of the Social Science Research Council (SSRC), Ms. Nina McCoy. This group visited the Hanoi School of Public Health and Hanoi Medical School and then travelled to Hue Medical and Public Health Schools.

The Tibet group travelled directly from Lhasa to attend the Beijing Board meeting on June 14, while the Vietnam and Myanmar groups met in Kunming, China to visit Kunming Medical School before traveling to Beijing on June 13.