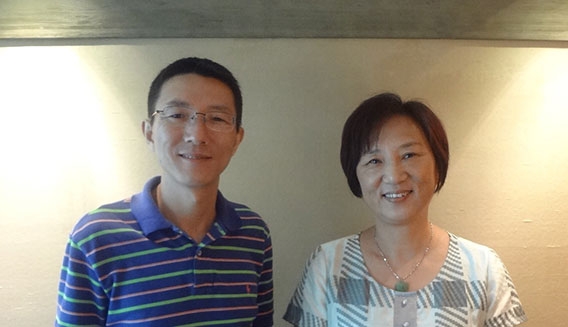 CMB President Lincoln Chen praised Roman Xu and Zhang Ye as they began their transition as the outgoing and incoming Directors of the CMB Beijing office, respectively. Approaching a century of work in China in 2014, CMB is looking forward to its Second Century and its anticipated centennial celebration in September 2014. Ms. Zhang Ye, a recognized leader in philanthropic and academic affairs, will succeed Roman Xu as the new Executive Director of the CMB Beijing office serving CMB programs and operations in China. Working with President Lincoln Chen in CMB’s Second Century Programs in China, Zhang Ye will join in guiding CMB through its centennial celebrations into the future of advancing health in China and Asia.

Roman Xu will leave CMB to pursue his PhD in Global Health Implementation Sciences at the University of Washington in Seattle. Roman leaves CMB to pursue training that will enable him to make even larger contributions to global health development in China. CMB celebrates his leadership and wishes him the best in his studies.

Roman joined CMB as Director of its Beijing Office 5 years ago and performed admirably in establishing the office, hiring local staff, and joining in the crafting of CMB’s strategy and program in China. Reflecting on his leadership, Lincoln Chen underscored that Roman demonstrated deep commitment to capacity building in China, strengthening health policy and systems sciences, and working collaboratively with CMB partners in the medical universities and government. Roman himself noted that: “I joined the CMB with a desire to contribute to China’s health development. I had observed how, under the veil of China’s economic miracle, health care in China had lagged behind. Despite a strong demand for health reform, there was a clear shortage of qualified health policy and systems researchers in China.” To help produce more reliable evidence for China’s health reforms, CMB began targeting support of “two legs” of investment in Chinese people and institutions.

For moving into the Second Century, Zhang Ye as Executive Director in Beijing will bring extensive experience and expertise in philanthropy and nonprofit management to the CMB Beijing team, as demonstrated by her successful leadership at the Ford Foundation’s Beijing Office, the Asia Foundation’s China Program, the Institute of Sustainable Communities, and Microsoft’s Community Affairs work in China. She is passionate about the development of civil society in China, and as a scholar and practitioner is actively engaged in helping to cultivate China’s nonprofit sector. At the helm of CMB’s China operations, Zhang Ye plans to work closely with CMB President Lincoln Chen and staff to guide CMB through its centennial year in 2014, launching CMB’s next century of work. Upon assuming the Directorship, Zhang Ye said “I aim to fully support the CMB mission, and look forward to collaborating with our Chinese and international partners to advance the health of the Chinese people through capacity building in health research, education, and policy development.”