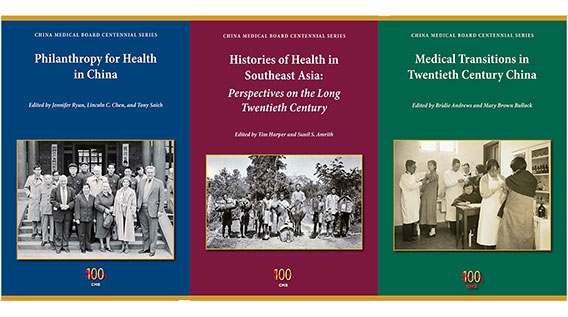 As CMB enters its centennial in 2014, we are celebrating and highlighting 100 years of philanthropy through a series of activities, events, and projects. These projects include three new volumes on the histories of health, medicine, and philanthropy in China and Asia, published by Indiana University Press.

The first of the CMB centennial volumes, Philanthropy for Health in China, was published in April 2014. The volume, edited by Jennifer Ryan, Lincoln C. Chen, and Tony Saich with contributions from Chinese and Western scholars, policy-makers, and thought leaders, follows the historical evolution of health philanthropy over the course of the 20th century and asks the question: what are the prospects for a new generation of health philanthropy in China?

The second of the CMB centennial volumes, Medical Transitions in Twentieth Century China, will be published in August 2014. The volume, edited by Bridie Andrews and Mary Bullock with contributions from a team of international scholars, engages in a in a retrospective examination of the history of the emergence of modern medicine and public health in China during a turbulent and transformative era.

The third and final volume of the CMB centennial volumes, Histories of Health in Southeast Asia: Perspectives on the Long Twentieth Century, will be published in August 2014. The volume, edited by Tim Harper and Sunil S. Amrith with contributions from scholars from a diverse array of countries, reflects on the history of public health in Southeast Asia over the past century by examining the sites of interaction and exchange in which ideas about medicine and health were transformed.

Philanthropy for Health in China

Histories of Health in Southeast Asia: Perspectives on the Long Twentieth Century