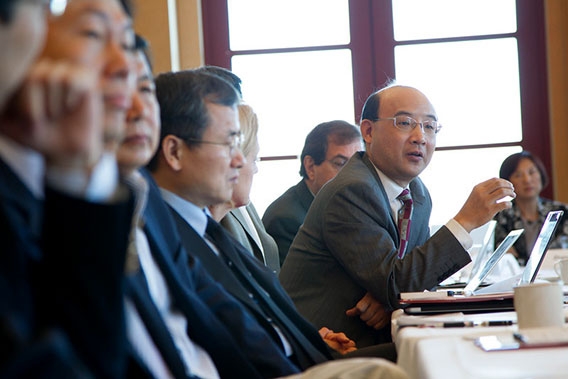 Recently, a plethora of MOOCs (massive open online courses) have generated tremendous excitement over prospects of transforming education around the world.  To investigate potentiality and pitfalls, the CMB sponsored a study tour program September 8-13, 2013 for 20 delegates from four of China’s leading medical universities, together with Chinese government officials.  The delegation devoted one week to visiting the premier medical universities in the United States at the University of California San Francisco (UCSF), Stanford University, Harvard University and its School of Public Health (HSPH), and the Massachusetts Institute of Technology (MIT).  The Chinese group sought to consider how recent developments in online education, especially the so-called “MOOCs” may transform health professional education in China.

Online and distance education are not new but have been operating in China for over a decade. Peking University has longstanding distance education programs. Yet, the rapid emergence of online platforms like Coursera, edX, and Khan Academy, has generated exciting developments in online education delivery that are changing conventional university education so rapidly that Stanford University President John Hennessey has labeled an educational “tsunami.”

On the study tour, Chinese delegates learned about new experiments in “flipping” the classroom. In the “flipped” class, traditional lectures are recorded in more interactive online formats. Students watch the lectures before coming to class, freeing up the in-class time for more team-oriented, problem or case-based learning. In San Francisco, delegates heard from faculty members and students at UCSF and Stanford University working on “the flip.” At Harvard, Dean of the School of Public Health Julio Frenk shared how he was working to implement recommendations of the Lancet Commission Report by blending online and in-person training to transform public health education around the world.

As CMB approaches its centennial in 2014, it is working collaboratively with its Chinese and international partners to set in motion the next century of improving health professional education and, ultimately, advancing health in Asia.