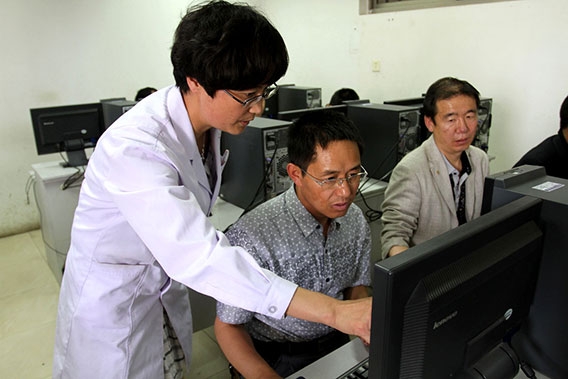 As CMB moves into its second century of philanthropy, it seeks to build networks and advance knowledge for achieving health quality with equity in the 21st century.  Delegates from four leading Chinese schools of public health, CMB’s China Nursing Network, the Chinese government, CMB staff, and guests gathered on October 17th in Beijing to discuss plans for producing massive open online courses (MOOCs) to transform health professional education in China. During the one-day consultation, participants discussed plans to develop MOOCs in the fields of public health, nursing, and continuing medical education, as part of a broader innovative education initiative aimed at strengthening teaching and learning in health professional education.

The one-day consultation aimed to draw conclusions from the CMB-sponsored Study Tour in September, during which school leaders and faculty from Fudan University, Peking Union Medial College, Peking University Health Science Center, and Sun Yat-sen University and Chinese government officials visited leaders in the so-called “MOOCs revolution” in the United States – UCSF, Stanford, Harvard, and MIT.  Delegates agree that the study tour experience had demonstrated that a transformation is, indeed, taking place. This transformation is being led by elite schools, which are using technology to improve pedagogy. These schools are all experimenting with how to use new courses to improve teaching and learning on-campus.

While the future of this transformation is not entirely clear, Chinese universities are already heavily involved. The morning’s program featured presenters from Tsinghua University, which has developed the XuetangX platform based on Open edX, and Peking University, which has a longstanding distance education program but is now also collaborating with Coursera, edX, and XuetangX.

During the meeting, public health deans discussed preliminary plans to produce MOOCs while nursing deans discussed using MOOCs as a tool for improving nursing education in China. Using a network-based approach, the eight nursing schools of the CMB China Nursing Network (CCNN) plan to develop the first Chinese courses for doctoral-level nursing education. Another session, joined by officials from the National Health and Family Planning Commission and the Ministry of Education, focused on the application of MOOCs for continuing education and general practitioner training in rural China. The consultation concluded by outlining the next steps for research and action.