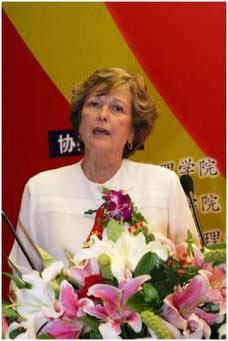 The deans of the eight schools in the CMB Nursing Network discussed ways to advance their shared interests in PhD training, policy research, and community nursing at an August 19 meeting at Peking Union Medical College (PUMC). The network is a channel for nursing programs at CMB-supported universities in China to cooperate in strengthening nursing education, particularly at the PhD level, and in seeking ideas and models from other countries that might be adapted for application in China. Network members include Central South University, China Medical University, Fudan University, Peking Union Medical College, Peking University Health Sciences Center, Sichuan University, Sun Yat-sen University, and Xi’an Jiaotong University.

A recent survey of the nursing deans solicited their views on priority areas for nursing education, and this workshop facilitated discussions on possible means to address them. Participants evaluated the potential for distance learning, with Chinese and American institutions partnering in nursing faculty development and PhD training; a dedicated fund to strengthen the research capacities of network members; new practice models for community nursing based on collaboration between universities and health departments; curriculum reform; and a conference to bring new research results to the attention of policy makers. Potential institutional leaders for these activities were identified, and these schools were charged with developing project proposals for CMB review and funding consideration.

The meeting coincided with the 90thanniversary of PUMC’s School of Nursing, one of China’s leading centers for nursing education. CMB Chair Mary Bullock, who opened the meeting, congratulated Dean Liu Huaping and her School of Nursing colleagues on this milestone in the school’s history and its work in educating generations of nurses.

Central South University will host the next meeting of the nursing network in Changsha in 2011, in association with that school’s 100thanniversary.