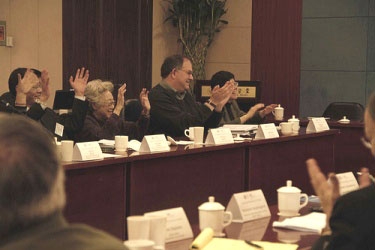 To mark its centennial in 2014, CMB has launched an initiative on the history of health philanthropy in China, seeking lessons for the future. Led by CMB Advisor Peter Geithner and Beijing Normal University Professor Wang Zhenyao (王振耀), about one and half dozen Chinese and international authors have been invited to contribute papers to a volume that will examine health philanthropy in China. At a workshop on February 24, the commissioned authors gathered in Beijing to present their initial research seeking feedback from their peers.

Philanthropy is now blossoming as an organized field in China given the explosive growth of private wealth and the expansion of civil society engagement. Yet, as the authors’ presentations in Beijing indicated, the cultural roots of China’s philanthropy are much deeper, dating back centuries. From this historical base, philanthropy in China will take on distinctive features, yet to be fully explicated. The research illustrates the evolution of this field, from the interaction between traditional philanthropy and Western philanthropy during the Republican era to the more recent design of a new enabling framework for philanthropy in the reform period. The writers also focus on the work of specific foundations, such as the Ford Foundation and the Chinese Red Cross, and particular health issues, such as HIV/AIDS and reproductive health, to demonstrate responses to changing public health conditions and patterns of Chinese cooperation with international philanthropies. The concluding section of the book will examine future prospects, particularly the important role that China can play in responding to global health challenges.