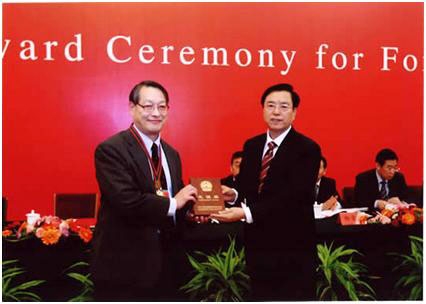 China Medical Board President Lincoln C. Chen received the People’s Republic of China Friendship Award, the highest honor that China confers upon foreigners, at a ceremony in the Great Hall of the People on September 29, 2010. Vice Premier Zhang Dejiang (张德江) made the presentation to Dr. Chen and 49 other individuals for their support of China’s economic and social development through sharing of knowledge, expertise, and technologies. Premier Wen Jiabao (温家宝) met with the honorees the following day at the Great Hall of the People and expressed his appreciation for their contributions to China.

Dr. Chen’s was recognized for his efforts to strengthen the capacity of Chinese medical universities. As CMB president since 2006, he has developed a grant-making strategy that focuses on health policy systems and sciences, medical education, rural health, and control of tobacco consumption. He also has initiated programs that bring China’s health conditions and medical accomplishments to the attention of a global audience. “Through partnerships with Chinese medical universities,” Dr. Chen said, “CMB can add its support to the work of health professionals to improve the health of Chinese citizens, thereby increasing the health of all people in an increasingly interdependent world.”

First established in 1955, the Friendship Award was reintroduced in 1991 after a hiatus of nearly two decades. It is administered by the State Administration of Foreign Experts Affairs, an agency under the State Council. Award ceremonies are held in conjunction with China’s observance of National Day on October 1.