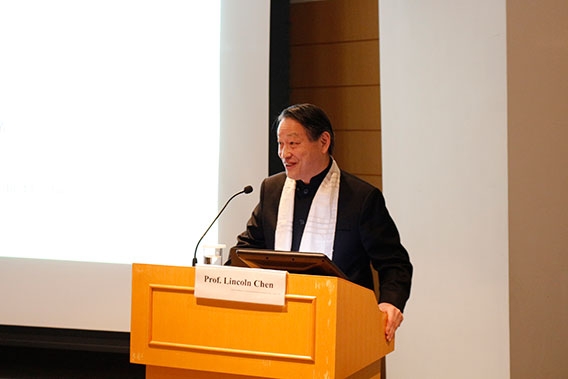 CMB President Lincoln Chen delivered the Joint Dean's and Presidential Distinguished Lecture “Educating Health Professionals in China: How successful are recent reforms of the world's largest system?” at the Hong Kong Academy of Medicine on January 7, 2015. The event was co-organized by the Academy and the Li Ka Shing Faculty of Medicine of the University of Hong Kong.

At the lecture attended by 250 student and faculty, welcoming remarks were offered by Gabriel Leung, Dean of the Li Ka Shing Faculty of Medicine, and Donald K.T. Li, President of the Hong Kong Academy of Medicine. After the lecture, the University and Academy hosted a black tie dinner for 50 guests. An after dinner speech was provided by Professor Sophia Chan, Hong Kong Under Secretary for Food and Health, who had been the former Dean of Nursing at the Li Ka Shing Faculty of Medicine and a CMB grantee.

The lecture described China’s ambitious efforts to reform its higher education system, including medical education reform starting in 1998 that was followed by the national health reform efforts starting in 2009. Based on a paper published in The Lancet in September 2014, President Chen underscored gains in educational expansion, especially in nursing and primary care providers. At the same time, China continues to struggle with revamping curriculum, faculty strengthening, and aligning its medical education system with the workforce requirements of a rapidly changing national health care system.