Appreciation to Peter and Deborah Geithner 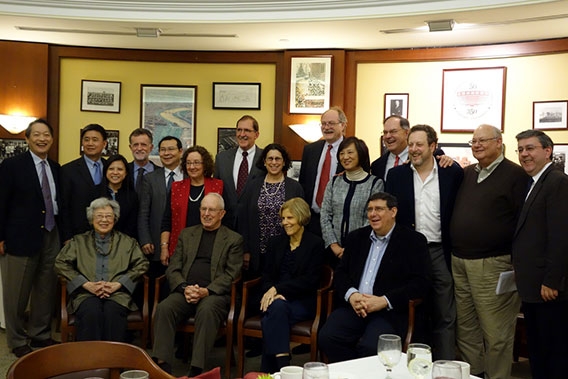 On December 2, friends and colleagues of Peter and Deborah Geithner had an opportunity to express their appreciation of both of them at a workshop and dinner in their honor hosted by Harvard University’s Ash Center for Democratic Governance and Innovation. The occasion celebrated Peter’s 28-year career, along with Deborah, with the Ford Foundation where he demonstrated how philanthropy can facilitate reform, catalyze innovation, and expand dialogue. Though retired from Ford a decade ago, Peter has continued to offer his wisdom to colleagues in philanthropies, nongovernmental organizations, and universities, in both the United States and Asia.

The workshop, “The Development of Civil Society and Philanthropy in China: Lessons of Ford Foundation Engagement,” highlighted some of the ways that Ford Foundation support has helped Chinese institutions and individuals promote reforms in a rapidly changing society. Hosted by Ash Institute Director, Tony Saich, senior Ford staff, such as Vice President Pablo Farias and Beijing Representative John Fitzgerald, joined in highlighting the lessons learned. Former China-based Ford program staff, including Joan Kaufman, Mark Sidel, and Zhang Ye, shared their frontline perspectives on changes that have transformed the fields of health, law, and philanthropy in China.

Peter along with Deborah worked with nearly all of the workshop participants in as director of Ford’s Asia programs (1990-1996), Beijing representative (1988-1990), and earlier with Ford in India and Thailand. Since 2006, Peter has been a senior management advisor to CMB where he led a host of policy and management reforms— by-laws, office relocation, new staff and management systems, and strategies in China and Southeast Asia. Most recently, he has supervised CMB’s 100th anniversary volume on China’s health philanthropy. The seeds of Peter’s CMB connections were planted many years earlier when Peter along with CMB President Lincoln Chen and Trustees Tom Kessinger and Tony Saich worked together as members of the Ford program officer cadre in Asia.

CMB trustees and staff join Peter’s and Deborah’s many friends in extending their gratitude to him for his wise counsel and their friendship.