CMB June Board Meeting in Beijing 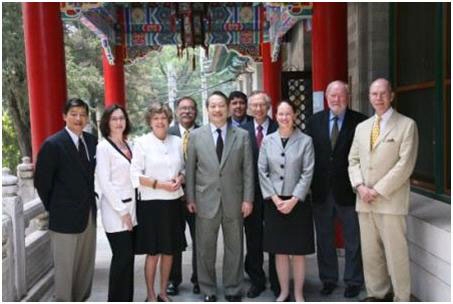 On June 14, 2010, CMB held its semi-annual board meeting at the Peking Union Medical College (PUMC) Chapel in Beijing. This was the first board meeting to be held in China since CMB 75thanniversary ceremonies in 2006. The Cambridge office was represented by President Lincoln Chen and Director of Administration Sally Paquet.Adding to the historic nature of this board meeting was the significant on-site coordination and presence of CMB’s new Beijing office, inaugurated in 2009. Beijing staff hosting were Roman Xu (徐东), Heidi Huang (黄婧欧), Shaojun Ma (马少俊), Linda Zhou (周娜), and Tao Jin (金涛).

Beyond review and discussion of customary business exercised at regular Board meetings, a major purpose of the Asia Board meeting was to expose Trustees to rapidly changing developments in China and Asia. Thus, the afternoon of the Board meeting was devoted to three panel discussions led by Chinese leaders on recent developments in China -- on governance, philanthropy, and health policy. These one-hour sessions consisted of a CMB Trustee moderating a Chinese speaker who made an overview presentation before a Chinese commentator, followed by questions and answers amongst the Trustees and guests.

At the conclusion of the Board meeting, the Trustees hosted a reception and dinner for 70 Chinese colleagues, including many with whom CMB works in Beijing in furtherance of its mission. At the dinner, certificates of appreciation with the designation of Honorary CMB Advisors were awarded to PUMC’s Liu Depei and Zhejiang’s President Ba Denian.