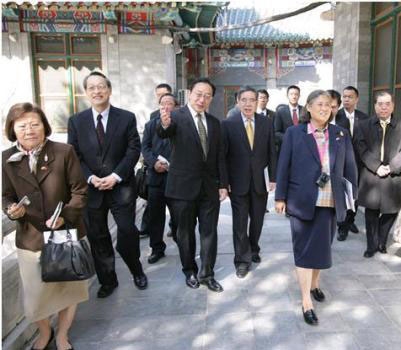 PUMC in China and Siriraj in Thailand were “twins” in the Rockefeller-CMB medical school development in Asia 100 years ago. In 1917-1922, Rockefeller Foundation and CMB supported the introduction of western medicine, emphasizing quality, insisting upon openness to women doctors, and nurturing the first generation of medical leaders in the two countries. Both schools pioneered the Flexner curriculum, adopted at the same time as Harvard and Johns Hopkins. Prince Mahidol, HRH’s grandfather, was a Harvard-trained doctor and public health professional deeply involved in the Rockefeller-Siriraj developments. The royal visit to PUMC provided an occasion to reflect on this shared history and current interests and to tour the campus, including the PUMC Hospital Museum.

CMB also has a long history of cooperation in China and Thailand. As the second program of the Rockefeller Foundation,

it helped to establish PUMC and provided direct support for medicine and public health at Siriraj, Mahidol, and Chulalongkorn medical schools. During HRH’s visit to the CMB office, Beijing Director Roman Xu shared some of the highlights of ongoing work in Western China, Southeast Asia networking, and China-Thailand bilateral exchange.