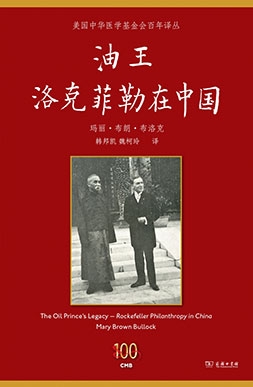 The Chinese CMB Centennial Book Series aims to make high-quality Mandarin translations of published English-language books related to the themes of philanthropy, health, and medicine in Asia available to a wider Chinese audience. By sharing stories about transnational collaboration in health, medicine, and philanthropy, CMB hopes to stimulate further Chinese scholarship and activity in these areas. Commercial Press and the Peking Union Medical College Press are the publishers of the series.

The series includes the following volumes:

Mary Brown Bullock, An American Transplant: The Rockefeller Foundation and Peking Union Medical College, University of California Press, 1980. This book is a study of the PUMC that focuses on the PUMC model and its origins, the role of the Rockefeller family in PUMC, and the careers of PUMC graduates.

John Z. Bowers, Western Medicine in a Chinese Palace: Peking Union Medical College, 1917-1951, Josiah Macy, Jr. Foundation, 1972. This book examines the PUMC in the broader context of the development of western medicine in China, the status of medicine in China before CMB involvement, and the contributions of PUMC and its various schools and departments.

Jennifer Ryan, Lincoln C. Chen, and Tony Saich. Philanthropy for Health in China, Indiana University Press, 2014. Contributions to this volume examine the historical roots and distinct stages of philanthropy and charity in China, the health challenges philanthropy must address, and the role of the Chinese government, including its support for Government Organized Non-Governmental Organizations (GONGOs).

Bridie Andrews and Mary Brown Bullock. Medical Transitions in Twentieth Century China, Indiana University Press, 2014. A team of international scholars examine the history of the emergence of modern medicine and public health in China during a turbulent and transformative era.