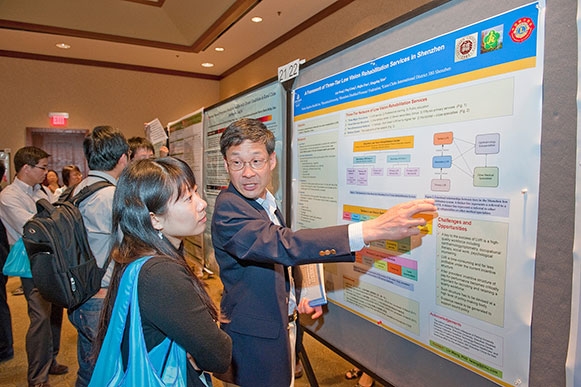 Both China and the United States are undertaking significant reforms to address deficiencies in healthcare coverage, access, quality, fragmentation, and costs. More than 200 American and Chinese health professionals found value in discussing these common challenges, as well as their respective governments’ responses to them, at the CMB-supported Westlake Forum III, held April 10-12 at Emory University in Atlanta. The theme for the 2011 symposium, the first to be held in the United States, was “Healthcare Reform in China and the US: Similarities, Differences, and Challenges.”

In the opening session, Shi Guang, who directs the Division on Health Policy Research at the Ministry of Health, said the Chinese government has set a clear objective of “health care for all.” Certainly China has already made strides in moving toward this goal and strengthening its health system. One indicator is expanding the growing availability of insurance: 90 percent of Chinese citizens now have basic health insurance, up from just 30 percent in 2005.

Yet action is needed on multiple fronts if China is to address health burdens associated with both communicable and noncommunicable diseases and rein in escalating medical costs. Shi Guang’s figures illustrated the scale of the challenge: China has 4.5 million tuberculosis patients – more than any other country except India. There are 93 million Chinese with hepatitis B – one third of all the cases in the world. There are 350 million smokers – and another 540 million people who may be affected by secondhand smoke. With increasing rates of diabetes, hypertension, and cardiovascular diseases, noncommunicable diseases now account for about 75 percent of deaths in China.

What steps can the Chinese government take to improve the country’s health care system? In his remarks, Shi Guang highlighted five priorities:

- strengthen the healthcare delivery system at the grassroots

- promote equitable access to an essential package of healthcare services

Both Chinese and American health planners are interested in the social determinants of health, which are emphasized in the Healthy Chinese 2020 program and the American initiative, Healthy People 2020. In his presentation, Howard Koh, Assistant Secretary of the Department of Health and Human Services, said the American government’s goals for a healthier nation include reducing preventable diseases, eliminating health disparities, improving care coordination, and ensuring that healthcare is patient-centered. The United States is just beginning to undertake better prevention, recognizing the long-term implications of having 130 million people with at least one chronic disease.

The Westlake Forum’s structure promoted a cross-cultural examination of issues in subsequent sessions, as each major topic featured both an American and Chinese speaker. In addition to the health sector overviews provided by Shi Guang and Howard Koh, the agenda included presentations on more specific topics, such as integrated delivery services; access to pharmaceuticals; information technology and electronic medical records; and healthcare access for special populations, such as migrant workers, rural residents, or people with mental disorders. The participation of senior representatives from 16 Chinese medical universities underscored the significance of these topics for the future of medical education in China.

The annual Westlake Forum, co-organized by CMB and Zhejiang Medical University, brings together key Chinese university leaders, researchers, and policy-makers to share experiences and bring greater visibility to health policy sciences. Discussions at Westlake III were greatly facilitated by the superb planning of Emory University and the involvement of CHPAMS, a network of young overseas Chinese scholars, which drew a large number of Chinese Americans to the conference. To help turn initial contacts at Westlake into joint research, CMB will support a small number of pilot projects developed by American and Chinese partners.