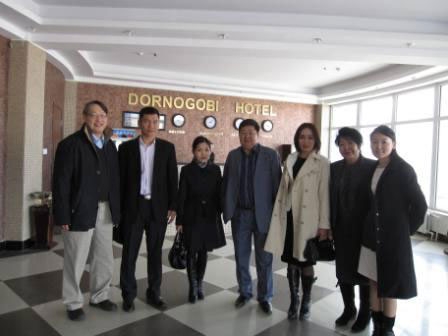 In April 2010, CMB President Lincoln Chen visited Mongolia for four days. In the national capital of Ulaan Baatar, Lincoln was able to call on the President of the Health Sciences University of Mongolia, Professor Lkhagvasuren Tserenkhuugyin, and the Vice Minister of Health, Dr. Tsolmon Jadamba. The meetings provided an opportunity for CMB and Mongolia to review the status of its relationship, pointing towards future collaboration.

After an overnight train trip southeast to Dornogobi, Lincoln also visited Sainshaind, the Southeastern province that hosts the Dornogobi Medical College. In Dornogobi, he called on Dean Nyankhuu and Director of Foreign Affairs Otchonimeg Mangal to review the CMB grant to the rural medical college.

CMB has worked in Mongolia for over 15 years, beginning its grant-making work in 1993 with Sainshand Medical College and then Ulaan Baatar School of Nursing in 1994. The purpose of Lincoln's visit in April was to reaffirm these ties and explore directions for the future.