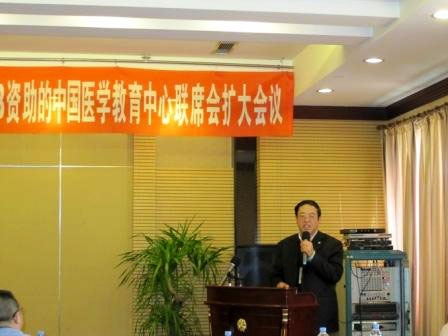 On January 10-11, 2010, leading faculty and experts from 24 medical universities/schools in China participated in a two-day conference focusing on Chinese medical education in Shenyang. China Medical University hosted the conference supported by a grant from the China Medical Board (CMB). The purpose of the conference was to provide a platform for China’s medical universities and schools at different levels to discuss the priorities in medical education.

The two-day conference consisted of three sessions. The first session featured activity reports from the four CMB-supported medical education centers- China Medical University, Peking Union Medical College, Sichuan University and Central South University. Over the past three decades, these four centers have introduced, adapted and promoted modern educational practices in China that have had an important impact on reforms in curriculum, pedagogy, evaluation and standardization. During the second session, Dr. Shi Pengjian (石鹏建), the deputy director general of the department of higher education from the Ministry of Education, delivered a speech on the future plan of China’s medical education. This was followed by a speech by Dr. Lu Zhaofeng (吕兆丰), the president of Beijing Capital Medical University on an award-winning innovative model of producing and placing rural medical workers. Those keynote presentations inspired much discussion by the participants in the third session, which was organized around three themes - the role of the medical universities in health reform in China, the integration of the undergraduate-postgraduate-continuing medical education, and how to promote interdisciplinary practice in clinical medicine, nursing and public health. Many new ideas were raised and discussed at the conference. The conference also facilitated communications among China’s medical universities and colleges at all levels that can lead to collaborative opportunities in promoting medical education developments in China.