Three Finalists for Director-General of WHO Answer Public Questions 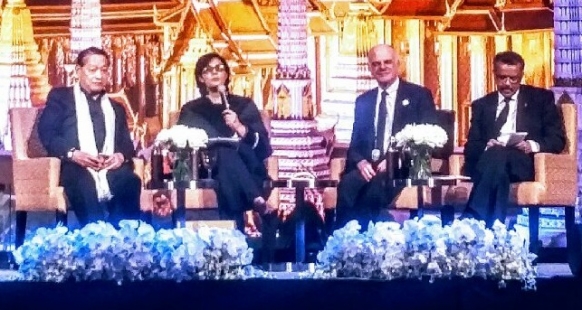 A special event was conducted at the Prince Mahidol Award Conference in Bangkok on February 2 when the three finalists campaigning to become the next WHO Director-General responded to open questions from about 900 participants at the conference dinner. The three candidates who were short-listed by the WHO Executive Board in the previous week are: Tedros Ghebreysesus of Ethiopia, David Nabarro of the United Kingdom, and Sania Nishtar of Pakistan. Moderated by CMB President Lincoln Chen, the panel exchange solicited the candidates’ positions on such key questions as: What are emerging global health challenges?  What are your highest priorities for reform of WHO?  How would you manage financial cut-backs in today’s donor funding climate?  One of the 3 candidates will be selected by a vote of the 194-member nations of the WHO in May to assume the leadership role on July 1, 2017.