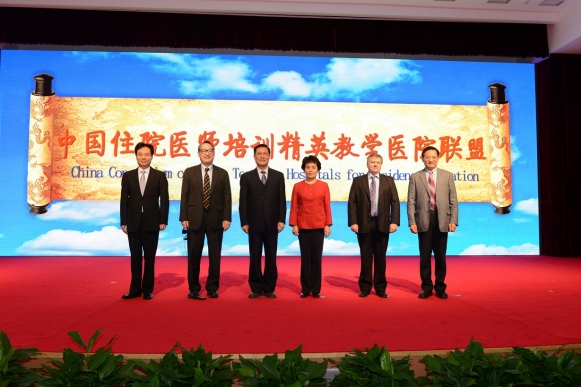 A premier Chinese health challenge for the 21st century is to ensure quality of care for all of its citizens. Thus, national accreditation, certification, and faculty development emerged as the key themes addressed by the 2015 PUMCH International Conference on Residency Education and the 5th Westlake Forum, which opened on October 31 in Beijing. The Chinese government is leading the way to improve postgraduate education, with its adoption of the 5+3 framework as the standard for medical education (5 year medical school + 3 years of residency training), its support for accreditation pilots at 559 hospitals and 24 demonstration sites, and, as announced the preceding day, the launch of a consortium of seven elite medical universities-hospitals to set the national pace for reform.

In his keynote speech, Lincoln Chen announced CMB’s partnership with Peking Union Medical College Hospital to enhance the quality of residency education, which he underscored would require a major national effort. He urged members of the consortium to focus on humanistic medicine, not just technical skills; to value social equity as well as excellence in medical specialization; and to look to the worldwide learning community as well as domestic sources for potential models. A post-conference session, featuring 10 Chinese PUMCH alumni working in America, highlighted specific experiences in postgraduate education.

More than 800 medical professionals attended the conference, with many more observing the presentations via the Internet.