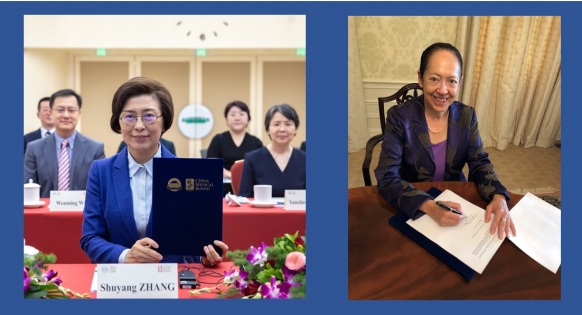 China Medical Board and Peking Union Medical College Hospital signed a memorandum of understanding (MOU) on June 7/8, extending their collaboration in areas related to academic enhancement including faculty development, support for residency training, and further development of the China Nursing Consortium of Elite Teaching Hospitals. Dr. Barbara Stoll, president of CMB, and Dr. Zhang Shuyang, president of PUMCH, signed the MOU on behalf of their respective institutions, with CMB President Emeritus Lincoln Chen, PUMCH Honorary President Zhao Yupei, and other dignitaries in attendance.

The signing took place on an auspicious day, as June 8 began the 100-day countdown to PUMCH’s centennial celebration.  In her remarks, Dr. Zhang called attention to CMB and PUMCH’s shared history:  “One century ago, CMB founded PUMCH, exerting profound influence on the development of modern medicine in China. Throughout the history of PUMCH, CMB has always been our strongest friend and collaborator.”  She welcomed the continuing collaboration that the MOU would facilitate.

While the signing ceremony took place virtually, a sense of warmth and friendship was evident among those in attendance in China and the United States.  Dr. Stoll pointed to the MOU’s sense of common purpose, saying, “Today we are signing a new MOU, reflecting our continued commitment to the shared goal of improving the health of the Chinese people and highlighting our shared history and enduring friendship.”  She expressed anticipation about the ways in which the two institutions can effectively respond to challenges and confidence about how much progress can be achieved through collaboration.

The ceremony concluded with heartfelt good wishes from leaders of both institutions.  They are eager to meet in person in September to celebrate the 100th anniversary of PUMCH and the start of the second century of this enduring collaboration.