Giving Shape to the Equity Initiative 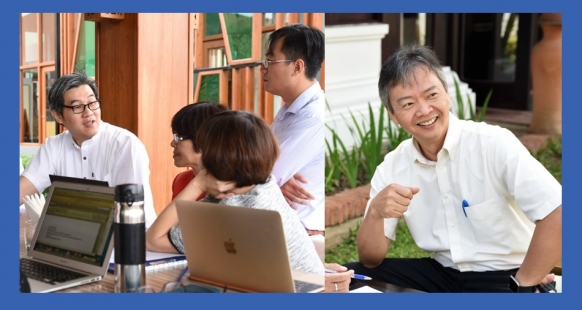 The Equity Initiative (EI) is a long-term program designed to develop the next generation of health equity leaders and to build a collaborative community for promoting health equity in Southeast Asia and China. Launched in 2016 with the support of CMB and the Atlantic Philanthropies, the program is now six cohorts strong, with 127 Fellows from 12 countries. EI Executive Director Le Nhan Phuong and EI Program Director Piya Hanvoravongchai have been engaged in the program since the early discussions of its goals and structure, and their expertise, insights, and life experiences have helped to shape the program. They recently shared some of the milestones in their respective career paths, their understanding of leadership and health equity, and the contributions they have made to EI.

Before the Equity Initiative was launched, Le Nhan Phuong, who serves as the program’s executive director, held a very traditional idea of leadership. “I thought of leadership as people in positions of authority, making good decisions,” he said, but as he immersed himself in developing the Equity Initiative, he realized leadership is more than that. “Leadership is an act, rather than a position,” Phuong explained, “and it is democratic, in that anyone can assert leadership.” That willingness to look beyond textbook definitions and to probe commonly held views has been a recurrent theme in Phuong’s career, which has taken him from clinical medicine to public health, grant-making, business school, and ultimately, the Equity Initiative.

For instance, Phuong recalls that his first understanding of public health and equity “came from the heart,” describing it as “when something causes you to say ‘this is not right.’” For Phuong, that awakening began when he was a college student who spent summers volunteering in refugee camps in the Philippines. Phuong himself had been a child refugee who made his way from Viet Nam to a camp in the Philippines and, eventually, to the United States. He entered medical school thinking that medicine would give him the skills and training to respond to some of the needs of refugees. But he came to feel that clinical medicine was inadequate in meeting community-wide needs, so after a few years of practicing medicine in the United States, he went on to earn a master of public health degree.

“My thoughts have always headed back to Southeast Asia,” Phuong said, and the ten years he spent with Atlantic Philanthropies, making grants in support of public health, brought him back to the land of his birth. As Atlantic started to wind down its Viet Nam program in 2013, he established a U.S.-based nonprofit organization, Resources for Health Equity, to carry on the work of advancing the fundamental rights to health and well-being of vulnerable and disadvantaged populations throughout Southeast Asia. In each of these roles, he persisted in asking fundamental questions about equity: “Is this fair? Is there another perspective? Is this the right answer?”

Those questions about equity also were of great interest to CMB, as Phuong discovered when he accompanied Lincoln Chen and members of a CMB delegation on their trip to Viet Nam in 2013. It was an opportune moment to consider collaboration, as Atlantic Philanthropies – a limited life philanthropy – was starting to craft ideas for legacy grants and CMB, inspired by the report of the Lancet Commission on Health Professionals for the New Century (2010), was taking a fresh look at human resources for health. Over time, and in consultation with both senior and young health leaders in the region, the two organizations outlined a framework to build the capacity of young leaders for health equity in Southeast Asia and China. Their vision was a long-term fellowship program that would increase understanding of health equity, invest in leadership development, and encourage young leaders to work across national borders and different disciplines and backgrounds. Those core ideas grew into the Equity Initiative and have served as a model for the six other Atlantic Fellows programs that followed.

The Equity Initiative is now six cohorts strong, with 127 Fellows from 12 countries. “My contribution to this enterprise has been to admit what I don’t know,” Phuong said, and then, alongside the Fellows, to seek answers. “I want to help our Fellows understand who they are and their own aspirations of what they want to do and how they want to do it,” he said, and he wants them to find joy and fulfillment, even in the difficult work of increasing health equity. In that way, the Equity Initiative can help Fellows define their goals and plant guideposts along their paths as leaders. As an example, Phuong points to two recurring sources of joy and fulfillment in his own leadership path: “The joy of working with people, especially young people, and being a problem-solver,” he said. “The more unusual the problem, the more interested I am in it, especially if the problem takes me beyond my comfort zone.”

Piya Hanvoravongchai began his career as a physician and director of a rural hospital in Thailand, and those early experiences deepened his understanding of public health. “As the director of a small hospital, you see the health picture from the ground up,” he said. Day-to-day encounters with patients helped shift his thinking about public health from solely medical terms – such as vaccinating children or screening for a particular disease – to include the social contexts that shape a community’s health. “People would come to the hospital wearing borrowed clothes or jewelry because they felt they would get better care if they were dressed up,” he explained. “They didn’t want to be perceived as someone who might not be able to pay the hospital bill. There were many different stories like that, which made me feel that more than clinical care is needed to make a difference in health policy and health systems.”

To build up his base of knowledge, Piya earned a master’s degree in international health policy from the London School of Economics and Political Science and a PhD in global health and population from Harvard University’s School of Public Health. He wanted to use his interests in health economics and health systems to advance the health reform agenda in Thailand.  He returned to Thailand, where he worked on a health systems and pandemic preparedness project for the London School of Hygiene and Tropical Health and began teaching at Chulalongkorn University.  He also helped launch HealthSpace.Asia, a collaborative online platform for Southeast Asia policy makers and researchers with interests in health policy and health research.

During his time at Harvard, Piya had worked as a research associate for Lincoln Chen, who was then serving as director of the Global Equity Initiative of Harvard University’s Asia Center. Several years later, when Lincoln was president of China Medical Board, he recruited Piya as a part-time advisor for CMB’s Southeast Asia program. “This was a chance for me to know the region better, and to engage with CMB’s partners in medical education and with networks in the Mekong region,” Piya said. His role with CMB expanded when CMB and the Atlantic Philanthropies began planning a leadership development program for health equity in Southeast Asia, which ultimately became the Equity Initiative.

“I wanted to design something that I would want to join,” Piya said, recalling the process of developing the initial program concept and presenting it to the Atlantic Philanthropies board. The concept was a holistic program that would give as much attention to experiential learning as to academic content. For Piya, a starting point in planning the Equity Initiative was asking “What are the experiences that are important for Fellows to have?” Answers can be found in program components such as Global Learning and the Asia Trek, which expose Fellows to on-the-ground health equity issues outside of their home countries, and Project Accelerator, through which Fellows develop ideas for health equity projects and build up their leadership and management competencies. Opportunities for bonding, peer learning, and reflection are integrated into the program, building a sense of community among Fellows that will continue long after their induction year in the program.

The program is intended to be dynamic, always incorporating the feedback of Fellows and partners in the region. Most of the 2016 Fellows – the inaugural cohort – were recruited from HealthSpace.Asia, and Piya’s earlier connection with them made it comfortable for them to offer suggestions to strengthen the program.  Seeking frequent feedback from Fellows – by asking “How can we keep learning and improving? How should we think about changing contexts? How can we contribute to systems change?” – helps to fine-tune the Equity Initiative and demonstrates a spirit of continuous learning, a key element of adaptive leadership.

Over the course of his career, Piya has shown an openness to new opportunities. “I want to do things that I enjoy, and that also make a difference and make good things happen,” he said. Through the varied roles he has played – as healthcare provider, researcher, policy adviser, educator, and now as program director of the Equity Initiative – he is supporting the development of the Equity Community aspect of the EI program, which aims to support Fellows, peers, and national and regional networks to influence meaningful systems change for health equity in the region.