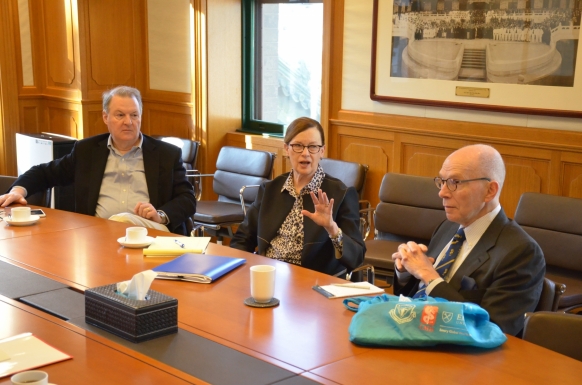 Since becoming a direct operating foundation, CMB has established residential offices in Beijing and Bangkok. New staff and new programs including Equity Fellows in Southeast Asia have been launched. A January-February Asian trip for 4 CMB trustees enabled them to gain a better understanding of the nature of CMB’s China and Southeast Asia programming. In Bangkok, Harvey Fineberg, Jane Henney, Jeff Koplan, and Jeff Williams visited CMB operations including attendance at the Prince Mahidol Award Conference and were invited guests to a tea hosted by Her Royal Highness Princess Maha Chakri Sirindhorn. At CMB’s Bangkok office, the trustees met with CMB staff and several Equity Fellows for discussions on the Equity Initiative and the ways in which it aims to build a community for health equity in Southeast Asia.

After the Bangkok discussions, Dr. Fineberg joined the Equity Fellows Annual Forum in nearby Hua Hin, where he led a dialogue on leadership for equity. Dr. Henney, Dr. Koplan, and Mr. Williams had earlier visited the CMB’s Beijing office, where they heard reports on CMB’s efforts in support of reforming residency clinical education as well as greater engagement for China in global health.