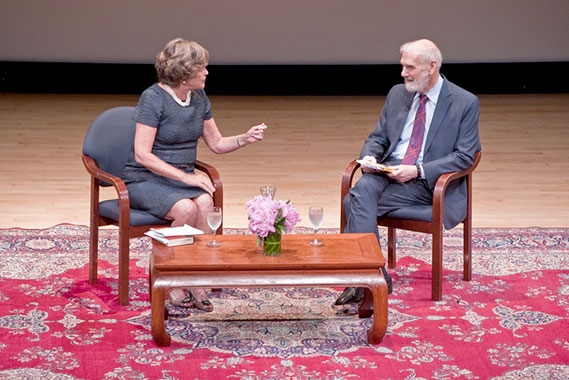 “American Philanthropy in China: Retrospective and Prospective,” the third of four celebratory events marking CMB’s centennial in 2014, was held on June 5 at Asia Society in New York City. This event, co-hosted with Asia Society’s Center on U.S.-China Relations, provided an opportunity to reflect on the momentous impact of Rockefeller and American philanthropies in China over the past 100 years, while also looking to the future of philanthropy in China. The event engaged with such questions as: What is the legacy of American philanthropy and cultural engagement in China? What will be the forces shaping philanthropy, both local and international, in this new era where China is increasingly prosperous and influential worldwide?

The public discussion, attended by over 150 people, began with welcoming remarks from Josette Sheeran, President and CEO of Asia Society, and CMB President Lincoln Chen. CMB Chair Mary Bullock then engaged in retrospective reflections with Professor Emeritus at Yale University Jonathan Spence on continuity and change across a century of American cultural engagement including philanthropy with China.

This was followed by a lively panel discussion moderated by CMB President Lincoln Chen on the prospects of Chinese philanthropy, with panelists Melissa Berman, President and CEO of Rockefeller Philanthropy Advisors, Inc., Yimei Chen, Executive Director of China Development Brief, and Tony Saich, CMB trustee and Director of the Ash Center for Democratic Governance and Innovation, Daewoo Professor of International Affairs at the Harvard Kennedy School. Click here to watch the webcast of the two-hour seminar.

Following the seminar, CMB launched the first of three centennial volumes, Philanthropy for Health in China, edited by Jennifer Ryan, Lincoln Chen, and Tony Saich. Published by Indiana University Press, the book brings together Chinese and foreign authors from diverse disciplines to landscape the state of philanthropy in China focusing on its future prospects.To learn more about China Medical Board’s centennial book series and other centennial projects, please click here.