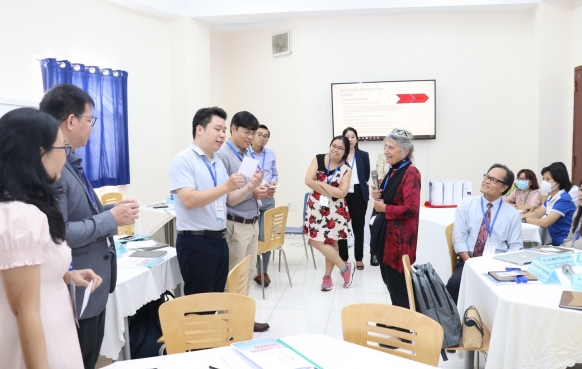 The initial in-person gathering for the CMB-supported project on “Strengthening Collaboration in Medical Education Between Viet Nam, Lao PDR, and Cambodia” represented a first step in building community and a culture of learning among medical educators from participating universities. The three-year project is designed to support medical education reform efforts in the three countries, using a shared learning model of inter-university cooperation to exchange best practices and align resources. The September 27-28 meeting was hosted by Can Tho University of Medicine and Pharmacy, in Can Tho, Viet Nam.

In all three countries, undergraduate medical education (UME) is predominately a six-year program focusing on basic sciences in the initial three years and clinical sciences and rotations in the latter three years. Yet an emphasis on knowledge acquisition (at the expense of competencies), high student-to-faculty ratios, and limited exposure to new pedagogical methodologies have limited opportunities for problem-based learning and development of clinical skills. Project leaders see competency-based medical education (CBME) as a key starting point for transformative change of medical education, and they hope that this collaboration will encourage medical universities to focus their curricula on professional competencies and enable students to acquire the skills needed to respond to evolving clinical and population health challenges.

Over the course of the meeting, participants discussed the principles of CBME; integrated teaching, including the design and teaching of clinical cases; the plan-do-study-act (PDSA) cycle, including case examples from the University of Medicine and Pharmacy at Ho Chi Minh City; and training of trainers. The meeting energized participants to initiate medical education reform towards CBME principles at their respective universities, initially through small-scale change projects, using the PDSA methodology. “We hope that through these inter-country exchanges, we will create a community of medical educators passionate about medical education reform across the region throughout the three-year project,” said Dr. David Duong, principal investigator for this project.

Participants at the gathering represent the core project faculty from Can Tho University of Medicine and Pharmacy, University of Health Sciences (Lao PDR), and University of Puthisastra (Cambodia), as well as faculty from the University of Medicine and Pharmacy at Ho Chi Minh City (Viet Nam) and project team members and experts from The Partnership for Health Advancement in Viet Nam (HAIVN), which is a collaboration between Harvard Medical School (HMS) and two HMS-affiliated teaching hospitals, Beth Israel Deaconess Medical Center and Brigham and Women’s Hospital.

This learning collaborative network builds on education reforms launched in response to The Lancet Commission on Education of Health Professionals Education for the 21st Century, which issued its pathbreaking report in 2010, and complements investments in medical education reform made by national governments, universities, the World Bank, Asian Development Bank, and other funders. The learning collaborative hopes to catalyze regional learning models, which may be expanded to include more countries in the Asia Pacific region, as well as disseminated to other regions in the world.