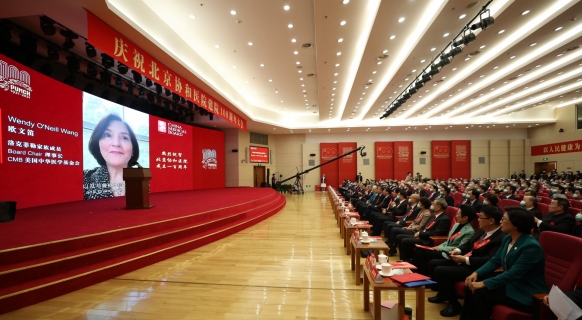 Peking Union Medical College Hospital (PUMCH) celebrated the 100th anniversary of its founding on September 16, a significant milestone that was recognized at a ceremony attended by senior government officials, PUMCH leaders, senior faculty members, and distinguished guests. Speakers at the ceremony praised PUMCH’s contributions to the development of modern medicine in China, and leaders of medical institutions in other countries and regions including China Medical Board (CMB) President Barbara J. Stoll shared congratulatory messages that highlighted PUMCH’s role in international collaboration.

In her remarks, Dr. Zhang Shuyang, president of PUMCH, noted that the hospital has successfully combined clinical research with more fundamental basic science research, leading to breakthroughs in the treatment of difficult, critical, and rare diseases. She also highlighted “the three treasures of Peking Union Medical College Hospital” – outstanding faculty, a well-stocked library, and well-preserved patient records – which have set a strong foundation for the hospital’s work.

CMB leaders congratulated PUMCH on its centenary in video messages that spoke to the institution’s past, present, and future roles. CMB Chair Wendy O’Neill’s remarks, delivered in Mandarin, were warmly received, and she highlighted the long-standing relationship between PUMCH and CMB. She noted that her great-grandfather, John D. Rockefeller Jr., joined by her great-grandmother and grandmother, attended the opening of PUMCH in 1921. PUMCH’s role has grown over the past century, as Ms. O’Neill pointed out in her remarks: “PUMCH not only serves patients in Beijing, but also partners with others in China and around the world to advance health.” CMB President Barbara J. Stoll echoed Ms. O’Neill’s congratulations and said, “We are confident that your past accomplishments will serve as bright lights guiding your progress toward bold goals for the future.”

PUMCH and CMB have a long, collaborative history built around a shared commitment to improving health. In June, the two institutions signed a five-year memorandum of understanding to extend their collaboration in areas related to academic enhancement, including faculty development, support for residency training, and further development of the China Nursing Consortium of Elite Teaching Hospitals. At the MOU signing ceremony, PUMCH President Zhang described CMB as “our strongest friend and collaborator throughout the hospital’s history.”

PUMCH was founded by the Rockefeller Foundation in 1921, with the goal of serving as the best medical center in Asia. It is currently ranked as China’s number one hospital by the Hospital Management Institute of Fudan University in Shanghai.