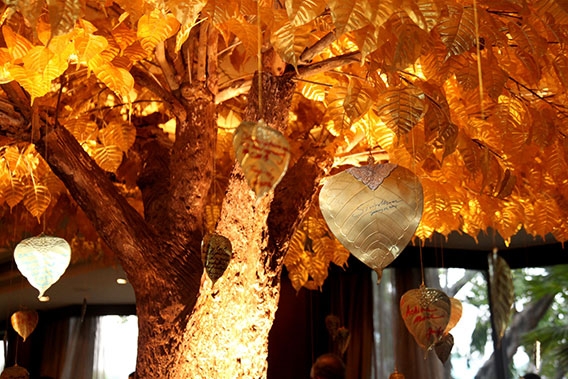 At the opening reception of this inaugural event, guests signed and attached a leaf to a learning tree, writing a message of hope for the future of CMB’s work in Asia. CMB Trustee Wendy O’Neill opened the dinner with welcoming remarks and introduced Thai organizing committee co-chairs Professors Charas Suwanwela of Chulalongkorn University and Wichit Srisuphan of Thai Nursing Council who spoke about CMB’s work in Thailand. CMB President Lincoln Chen invited key guests to offer their stories, memories and reflections of CMB and a future vision of health professional education, including Zeng Yixin and Zhu Chouwen of China, Keizo Takemi of Japan, Bong-Min Yang of Korea, Manuel Dayrit of the Philippines, Richard Horton and William Summerskill of the Lancet, Le Nhan Phuong of Vietnam, Khin Tar Tar of Myanmar, Wipada Kunaviktikul of Thailand, Julio Frenk of Harvard, Ariel Pablos-Mendez of USAID, and many others.

Just before dinner, a video and slides were shown of the earlier Royal Luncheon with Her Royal Highness who joined a CMB Trustees luncheon earlier on the same day. Thai medical and nursing students participated by offering their dreams for health professional education for the future, providing music and dance, and helping with management of the event. The next day, many participants traveled to Pattaya to join the annual Prince Mahidol Award Conference (PMAC) “Transformative Learning for Health Equity,” January 29-31, which was co-hosted by CMB.

To learn more about the event, please read the CMB Bangkok 100th brochure.